So what is today’s tea fortune? 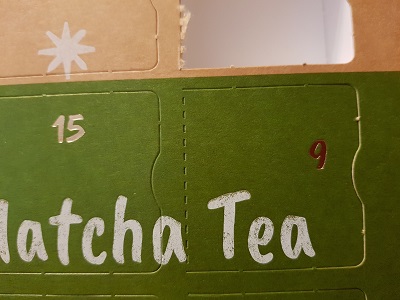 Okay now we’re talking! I always buy ginger biscuits toward Christmas time as I consider it Christmasy. I know it’s not technically but cinnamon is and certain spices just remind me of it, ginger in pudding form is one of them.

I’m so looking forward to this. I adore ginger!

In raw form it smells slightly gingery and spicy but it’s subtle.

I will be using the mini Matcha whisk that came with the kit.

As soon as the water hit the tea it filled my nose with ginger and spices, like fresh baked biscuits.

No real foam to speak of.

Flavour wise it’s creamy ginger with some sweetness and a touch of astringency. It’s also got some fire to it which is probably the chili. The green tea tastes earthy and bitter but subtle behind the ginger.

If you don’t like ginger this isn’t the blend for you, it’s not overpowering but I love ginger so it’s pleasing to me.

I imagine this is more suited to latte drinks than ceremonial methods, but I like it all the same.

This is the only Matcha so far that I would consider buying a pot of for Christmas. Orange Matcha was my favourite up until this point and now I’m not sure which would take the top prize. If this was perhaps less bitter it would be amazing, i’m sure milk would sort that issue.

That being said my partner blind tasted my drink and he couldn’t tell what flavour it was. And it does smell nicer than it tastes.

Join me tomorrow for another Matcha review.